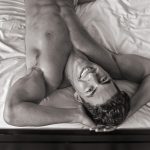 I have been wanting to work with Christopher for years. I had a photo shoot booked with Chris in the summer of 2015 and, when it fell through, it broke my heart a little. So, mid-summer 2016, I went to him, to Quebec, Quebec. I am quite used to meeting models, but I was still uncommonly giddy and nervous to meet with Chris for the first time.

I was staying in a back corner of Old Quebec – just far enough away from the more bustling Rue Saint-Jean – in quite a nice apartment-style hotel room and, just after my first coffee too early on a Sunday morning, I met him outside. Chris was dappled-drawn in the morning light under the trees of the park across the street. And while he is strong enough and handsome enough and swarthy enough to be intimidating, he was immediately affable and friendly and funny too.

Chris is featured on FashionablyMale and twice on DNA in Part 1 and Part 2.

Anatomia with Ricardo and Jean 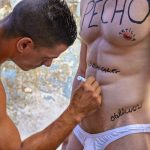 I have learned to speak a little Spanish, but never enough, of course. I have some experience with photo shoot Spanish.  So much so that even when I photograph anglophone models, I want to direct them in Spanish. The tricky part isn’t the names of things but all of that imperative tense.

I also have anatomy Spanish, which, yes, is altogether useful. To help others with anatomy Spanish, Jean gives you some direction with the assistance of Ricardo, and with Ricardo’s body as his canvas. It took Jean a while, and a few tries, to write “ombligo” the way I wanted it. And Ricardo was distractingly and amusingly ticklish for “axila”.

I might have learned anatomy Spanish faster, had I had Ricardo’s body for direction and as a study aid.  Meanwhile, I normally don’t get to touch my models but,  gratefully, I got to write one of the words on Ricardo. I’m not telling you which one. 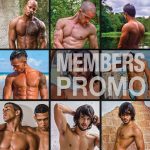 Have you been putting off buying a membership with Kevin Slack Photography?  Well, now is your best time to sign up. Now available: 100 memberships for just $10 for full access to all my photography for one month. That’s nearly 50% off the regular price! With no recurring fees.

Once I have sold 100 memberships, this promotion will end. And I cannot promise that I will do it again. Or when.  Click here for details and to sign up before this limited offer ends. 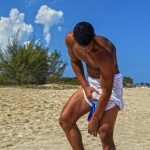 It’s a hazy mid-summer in Cuba and Modus Vivendi has officially released my set of work on Megano Beach with Randy, Jose Alejandro and Hector for their new Rainbow Line.

With much thanks to Modus Vivendi, Burbujas de Deseo, Fashionably Male, Twisted Male Mag,  the Underwear Expert, and MEN & underwear for the PR.

Static Electricity with James and Gabriel 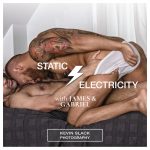 James, sexy, smart and sleepy-eyed James, is based in the UK. When he contacted me to collaborate, he was enthusiastic when I proposed a duo shoot. And so I got in touch with Toronto-based Gabriel. For the initial part of the shoot, I kept the boys apart, and forced them to ignore each other. When they finally got together, James and Gabriel sparked such a natural and voracious chemistry and they gave me something really electrifying. With thanks and gratitude to Peter and Steve for their beautiful home. Look for the cameo by Billy the dog.

THE EIGHTH in Havana 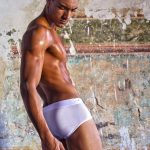 I recently had the opportunity to create work for THE EIGHTH in Cuba – where I worked with Jorge Luis and Ricardo and new recruit, Yunier in the heart of Old Havana in La Casa de los Marquéses de Arcos.

La Casa de los Marquéses de Arcos, like so much of Havana, is currently under renovation. Fernando, the construction boss, was happy to provide me with hard hats and overalls and even picks and axes. But, curiously, he had no boots. I had also arranged with Fernando to work on a Sunday when nobody was scheduled to work. However, Fernando called me on Saturday night to explain that deadlines and work have been recently accelerated and so there would be teams working. I was welcome to claim a space, he said, while assuring me that I would be left alone to my work.

When we arrived early Sunday morning before 8am there were already groups of tourists on Mercaderes street marveling at the old mansion. That’s a new trend: organized consumption. Inside, the construction boss gave me another tour of the space. I looked for an interesting space with more light and less workers. With groups of tourists wandering in off the street, it was smarter to work upstairs. And so we settled on a large room on the top floor facing Mercaderes street. We had spotted at least a dozen workers in various cavernous rooms that honeycombed off the main open square that cut right down the middle of the mansion. They were chipping at walls, or busy with woodwork or ironwork and, indeed, they had no boots. They were working in sneakers.

At our work, we were not left alone as much as we had been promised. At first, workers would pass by but much too slowly. Before long, the more curious or the more brave just stood around and watched.  But there was nothing to do for it and the models did not mind. The painting on the wall in some of these photos is original work dating from at least before 1844.

THE EIGHTH visits Havana on The Underwear Expert: http://www.underwearexpert.com/2016/04/the-eighth-in-cuba/

I’ve also added a new gallery of El Toro to my portfolio: Brutal Tranquility – Studies of El Toro. I shot El Toro in Los Jardines de Hershey near Santa Cruz del Norte. We found a quiet spot by a river near a short but rambunctious waterfall and set to work. He appears as glorious as ever in his birthday suit on the top of the hills about the town that Hershey built. Yes, it was his birthday.

All Eyes on Cuba 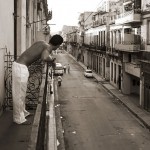 I know that it might seem like I have been missing.  But I’m right here working through new work. I was in Cuba. And then I was distracted by life and a busted up thumb too. And I was working through a couple of commercial photo shoots. But my thumb mostly works and I’m still working too. I’m back on my own work and on my own schedule too. I hope to share some new work with El Toro in a couple of weeks.

Meanwhile, with all eyes on Cuba, the Advocate recently shared this gallery of my work: Eyes on Cuba.

From the Advocate: “Kevin Slack has been visiting his favorite exile, Cuba, since 2000, documenting the country and especially the men, while building an extensive portfolio. While that country is tilted on the edge of change, Kevin continues to return, trying to uncover the restless and vital spirit of Cuba and Cuban men. While he focuses mainly on Havana, Kevin has traveled the island from Pinar del Rio to Holguin.” 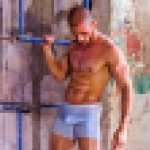 I’m still here.  And I’m still working, I promise.  I have been working on a couple of commercial photo shoots that I can’t really tell you about yet.  And they are shot and edited and ready – well almost.  But I can’t share them yet, until the companies are ready to launch their campaigns.  Meanwhile, in a couple of weeks, I will be back to my own work and my own publishing schedule. And I hope my updates are a little speedier and a little more regular. Thank you for your support and your patience.

The Virtus Line by Modus Vivendi 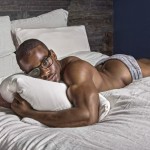 And you can watch the backstage video from the Virtus Line campaign here. 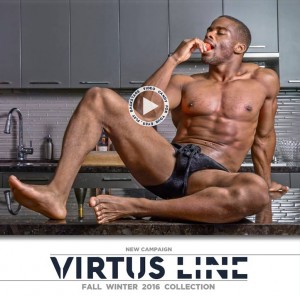 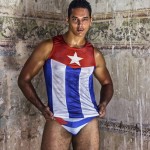 Check out my interview on BeautifulMag – Captain Cuba / Cuba Libre.  Jorge Luis, Kevin Slack’s long-standing muse, is a monument of man and of Cuba too. One of his favorite models, favorite Cubans, favorite friends, Jorge Luis has already left Cuba. It was only by accident that they were in Havana at the same time, and found a moment to work together for one more last time: “And here I leave him, my Captain Cuba, my muse photographed in the museum.” 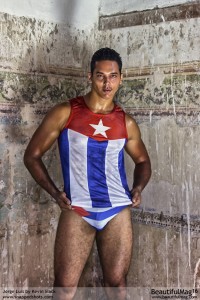